During the presidency of Andrew Jackson, this law authorized the confiscation of land from Native Americans and provided resources for their forced removal west of the Mississippi River.

The Invasion of America

INTERACTIVE MAP: INDIGENOUS TERRITORIES, TREATIES, AND LANGUAGES IN THE US
Andrew Jackson Message to Congress

What commitments and responsibilities did the federal government take on with this law?

In what ways did the forced removal of Native Americans betray these commitments?

Why might Jackson’s supporters favor removing Native Americans to lands west of the Mississippi?

Following impassioned public debate, Congress passed a removal act supported by President Andrew Jackson. The act enabled the Jackson administration to exchange lands west of the Mississippi River with Indian nations, which were then required to leave the eastern United States. While Jackson insisted that their departure would be voluntary, the act authorized money later used to support the military-led forced removals of Native peoples.

An Act to provide for an exchange of lands with the Indians residing in any of the states or territories, and for their removal west of the river Mississippi [excerpt]

Be it enacted by the Senate and House of Representatives . . . That it shall and may be lawful for the President of the United States to cause so much of any territory belonging to the United States, west of the river Mississippi, not included in any state or organized territory, and to which the Indian title has been extinguished, as he may judge necessary, to be divided into a suitable number of districts, for the reception of such tribes or nations of Indians as may choose to exchange the lands where they now reside, and remove there . . .

And be it further enacted, That in the making of any such exchange or exchanges, it shall and may be lawful for the President solemnly to assure the tribe or nation with which the exchange is made, that the United States will forever secure and guaranty to them, and their heirs or successors, the country so exchanged with them; and if they prefer it, that the United States will cause a patent or grant to be made and executed to them for the same . . .

And be it further enacted, That upon the making of any such exchange as is contemplated by this act, it shall and may be lawful for the President to cause such aid and assistance to be furnished to the emigrants as may be necessary and proper to enable them to remove to, and settle in, the country for which they may have exchanged; and also, to give them such aid and assistance as may be necessary for their support and subsistence for the first year after their removal.

And be it further enacted, That it shall and may be lawful for the President to have the same superintendence and care over any tribe or nation in the country to which they may remove, as contemplated by this act, that he is now authorized to have over them at their present places of residence . . .

And be it further enacted, That for the purpose of giving effect to the Provisions of this act, the sum of five hundred thousand dollars is hereby appropriated, to be paid out of any money in the treasury, not otherwise appropriated. 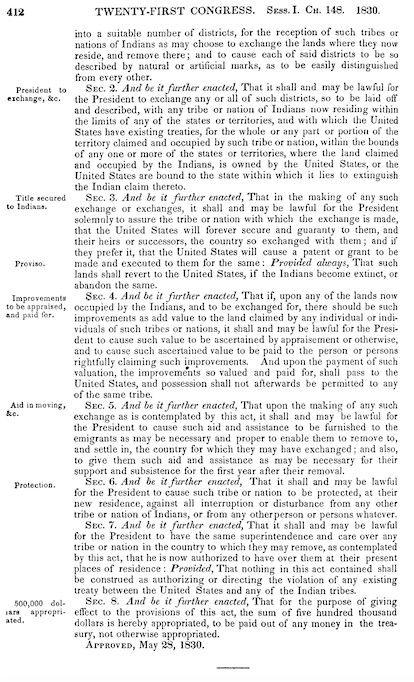