Under the principle that women assumed the citizenship of their husbands, this act stripped citizenship from U.S.-born women when they married noncitizen immigrant men.

How could women lose their U.S. citizenship, according to this law?

What other actions are outlined in this law that would lead to the revocation of citizenship rights?

What potential impacts would losing citizenship rights have on women?

This law further extended the principle that women assumed the citizenship of their husbands by stripping citizenship from U.S.-born women when they married non-citizen immigrant men. Losing their citizenship barred women from certain kinds of employment and made the vulnerable to detention and deportation. Soon after women received the vote with the Nineteenth Amendment in 1920, this law was abolished with the Cable Act of 1922 except for women who married “aliens ineligible for citizenship,” or Asian immigrant men. The impact of this loss of citizenship fell most heavily upon U.S.-born Asian American women until this condition was also ended in 1931. 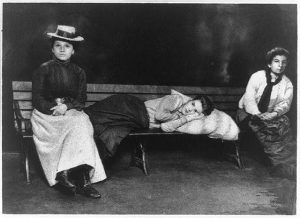 CHAP. 2534.-An Act In reference to the expatriation of citizens and their protection abroad.

Be it enacted by the Senate and House of Representatives of’ the United States of America in Congress assembled . . . .