An international coalition of Chinese merchants and students coordinated boycotts of U.S. goods and services in China and some cities in Southeast Asia to protest the Chinese Exclusion laws.

What steps does The Atlantic identify as leading up to the Anti-American boycott?

What interest group does The Atlantic identify as major supporters of Chinese exclusion? Why might they support exclusion?

How did Chinese merchants and activists protest poor treatment by immigration officials?

An international coalition of Chinese merchants and students coordinated boycotts of U.S. goods and services in China and some cities in Southeast Asia to protest the Chinese Exclusion laws. In particular, boycott leaders objected to the over enforcement of the laws by the Immigration Bureau, which sought to deny entry to Chinese people legally exempt from the law, such as diplomats, merchants, students, tourists, and merchant family members. The 1906 San Francisco Earthquake ended the boycott. President Theodore Roosevelt addressed Chinese anger by issuing an executive order requiring the Immigration Bureau to uphold U.S. laws and respect the entry rights of the exempt classes. Attempting to demonstrate U.S. friendship, Roosevelt and his Secretary of State, Elihu Root, supported a scholarship program designed to bring elite Chinese students to study in the United States as Boxer Indemnity Scholarship Fellows (1908-1929).  In this way, some of China’s most famous twentieth century intellectuals received their graduate training in the United States. 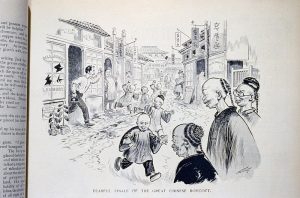 1906 Article from the Atlantic

Excerpts from The Atlantic:
[T]he boycott movement owes its initiative, not to the Chinese government, but to individual and popular influence, and is almost entirely the outgrowth of the ill-feeling of the people who have been the victims of the harsh exclusion laws and the sufferers by the race hatred existing in certain localities and classes in the United States . . .

The treaty of 1868, known as the Burlingame treaty, was hailed as a great triumph of American diplomacy, and the President, in communicating its consummation to Congress, spoke of it as a “liberal and auspicious treaty” . . .

But within twelve years a situation was developed which led our government to ask for a modification of our treaty relations with China. This was the demand which arose on the Pacific Coast that some check should be placed on Chinese immigration, in the interest of American labor . . .

China consented to such modification as would not essentially change the principle of that instrument. And thereupon the immigration treaty of 1880 was agreed to, restricting the coming of Chinese laborers . . .

But even this treaty, which had been obtained from China so reluctantly . . . did not prove satisfactory to the increasing demands of the labor unions . . . the Scott Act was passed by Congress . . . Our government had thus flagrantly disregarded its solemn treaty obligations… the Scott Act was modified so as to allow the Chinese laborers lawfully in the United States to visit China and return under certain restrictions . . . .

The treatment which the Chinese residents have received at the hands of hoodlums, ruffians, race-hater, and mobs has been a disgrace to our civilization; but that has not been so shameful as their treatment by the officials of Federal and local governments . . .

American merchants and companies engaged in the China trade have in recent years sounded a note of warning without any influence upon Congress. American missionaries have wrought up their denominations to a state of fear for the missionaries and of indignation at the inhumanity of our conduct as a nation.

It is not to our credit as a Christian and liberal-minded people and as a just government that all these complaints, warnings, and appeals have been of no avail, and that our interest and sense of duty could be awakened only when our trade was threatened. Not until the boycott began to be felt was any check placed upon the harsh treatment of and unwarranted discrimination against the Chinese in or seeking admission to our country. The President’s order of June last has been effective in bringing about a more reasonable enforcement of the laws and regulations, and has greatly relieved the situation. But the laws of Congress and the regulations to carry them out are still in force, and until they are repealed or modified, the grievance of the Chinese will continue.