Negotiated during construction of the Transcontinental Railroad which relied heavily on Chinese labor, this international agreement secured US access to Chinese workers by guaranteeing rights of free migration to both Chinese and Americans. 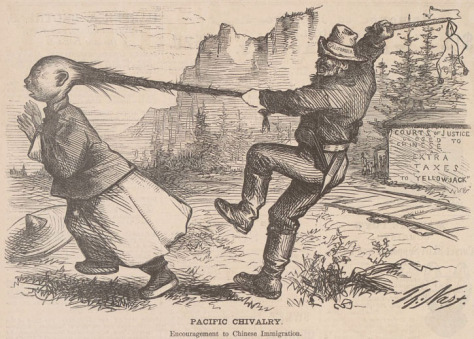 Why was it important to the U.S. government ad railroad interests to secure access to Chinese workers?

In what ways did the Burlingame Treat put China and the United States on equal terms?

How might this treaty have benefited people from both China and the United States?

Congress authorized construction of the Transcontinental Railroad in 1862, during the upheavals of the Civil War, intending that this major infrastructural project would cement the connection between the eastern and western halves of the United States at a time when the north and south were at war.  Labor shortages delayed the project by years, a serious problem that was resolved when the Central Pacific Railroad began recruiting Chinese workers, eventually in numbers reaching well over ten thousand at a time.  The U.S. government sought to secure access to Chinese workers, many of whom worked on three-year contracts, despite Chinese laws banning emigration by Chinese.  The Burlingame Treaty was the first international agreement signed since the Opium War (1839-42) that dealt with Chinese on equal terms and secured the rights of Chinese to free immigration and travel within the United States and most favored nation status in trade.