Rather than enacting racially discriminatory and offensive immigration laws, President Theodore Roosevelt sought to avoid offending the rising world power of Japan through this negotiated agreement by which the Japanese government limited the immigration of its own citizens. 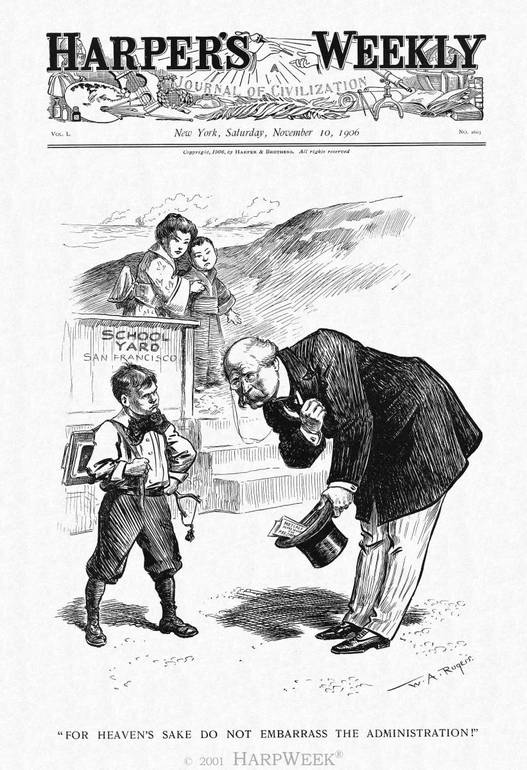 What class of immigrants does President Roosevelt wish to block?

What long-term impacts might this law have on Japanese communities in the United States?

Increasing levels of Japanese immigration, in part to replace excluded Chinese agricultural workers, met with concerted opposition in California. To appease Californians and avoid an open breach with the rising world power of Japan, President Theodore Roosevelt brokered this diplomatic agreement whereby the Japanese government assumed responsibility for sharply restricting Japanese immigration, particularly that of laborers, so that Japanese American children could continue to attend integrated schools on the west coast. Family migration could continue, however, as Japanese American men with sufficient savings could bring wives through arranged marriages (“picture brides”), their parents, and minor children. Consequently, the Japanese American population was more gender balanced than other Asian American communities and continued to grow through natural increase, leading to more pressures to end their immigration and further diminish rights for those in residence.

Let me begin by complimenting you upon the painstaking thoroness and admirable temper with which you have been going into the case of the treatment of the Japanese on the coast . . . I had a talk with the Japanese Ambassador before I left for Panama; read him what I was to say in my annual message, which evidently pleased him very much; and then told him that in my judgment the only way to prevent constant friction between the United States and Japan was to keep the movement of the citizens of each country into the other restricted as far as possible to students, travelers, business men, and the like; that inasmuch as no American laboring men were trying to get into Japan what was necessary was to prevent all immigration of Japanese laboring men – – that is, of the Coolie class – – into the United States; that I earnestly hoped his Government would stop their coolies, all their working men, from coming either to the United States or to Hawaii.  He assented cordially to this view and said that he had always been against permitting Japanese coolies to go to America or to Hawaii . . . I hope that my message will smooth over their feelings so that the government will quietly stop all immigration of coolies into our country.  At any rate I shall do my best to bring this about.