Why did naturalization rights need to be extended to African immigrants?

How does naturalization promote the rights and protections of immigrant communities?

What impact do you think denying naturalization rights had on Asian immigrants?

An Act to amend the Naturalization Laws and to punish Crimes against the same, and for other Purposes.

Be it enacted by the Senate and House of Representatives of the United States of America in Congress assembled, That in all cases where any oath, affirmation, or affidavit shall be made or taken under or by virtue of any act or law relating to the naturalization of aliens, or in any proceedings under such acts or laws, and any person or persons taking or making such oath, affirmation, or affidavit, shall knowingly swear or affirm falsely, the same shall be deemed and taken to be perjury, and the person or persons guilty thereof shall upon conviction thereof be sentenced to imprisonment for a term not exceeding five years and not less than one year, and to a fine not exceeding one thousand dollars . . . .

SEC. 3. And be it further enacted, That any person who shall knowingly use any certificate of naturalization heretofore granted by any court, or which shall hereafter be granted, which has been, or shall be, procured through fraud or by false evidence, or has been or shall be issued by the clerk, or any other officer of the court without any appearance and hearing of the applicant in court and without lawful authority; and any person who shall falsely represent himself to be a citizen of the United States, without having been duly admitted to citizenship, for any fraudulent purpose whatever, shall be deemed guilty of a misdemeanor, and upon conviction thereof, in due course of law, shall be sentenced to pay a fine of not exceeding one thousand dollars, or be imprisoned not exceeding two years, either or both, in the discretion of the court taking cognizance of the same . . . .

SEC. 7. And be it further enacted, That the naturalization laws are hereby extended to aliens of African nativity and to persons of African descent. 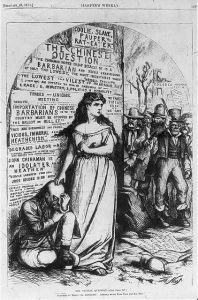