Even as the bracero program continued to recruit temporary workers from Mexico, the Immigration Bureau led round ups of Mexican nationals. The Bureau claimed to have deported one million Mexicans.

U.S. House of Representatives Historian on the raids

What was “Operation Wetback” and what motivated it?

What do you think explains the recruitment of Mexican labor in the southwest?

How might this operation have disrupted Mexican communities in the United States?

Not subject to general immigration restrictions until 1965, Mexicans crossed into the United States at rates of about a million per year in the 1950s. This migration was largely unregulated and southwest agricultural interests depended on Mexican labor; however, national concerns regarding employment for returning soldiers and uncontrolled migration across the southern border inspired the Immigration Bureau to crack down on Mexican immigrants in the United States. Even as the bracero program continued to recruit temporary Mexican workers, the Immigration Bureau and Border Patrol led these military-style round ups, claiming to  have deported one million Mexicans. Among those deported, included many U.S. citizens of Mexican descent. 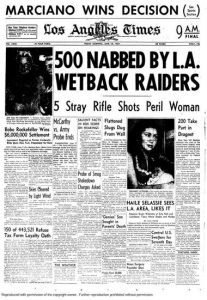 In 1951 President Truman’s Commission on Migratory Labor released a report blaming low wages in the Southwest and social ills on illegal immigration: “The magnitude … has reached entirely new levels in the past 7 years.… In its newly achieved proportions, it is virtually an invasion,” the report said. After touring Southern California in August 1953 to assess the impact of illegal immigration, President Dwight D. Eisenhower’s Attorney General, Herbert Brownell, Jr., pushed Congress to enact sanctions against employers of undocumented workers and to confiscate the vehicles that were used to bring them to the United States.While neither proposal became law, the administration moved forward on plans for a deportation operation. On June 9, 1954, INS Commissioner General Joseph Swing announced the commencement of “Operation Wetback.”The first phase of the operation began in California and Arizona. Its effectiveness depended on publicity as well as manpower. Extensive media coverage that often exaggerated the strength of the Border Patrol, as well as targeted displays of strength, gave the impression of a greater force. In many regions, this strategy convinced thousands who had entered the U.S. illegally to repatriate voluntarily. In Texas, for example, more than 63,000 individuals returned to Mexico of their own volition; U.S. officials detained an additional 42,000 persons in July 1954. An INS report later indicated that the agency apprehended nearly 1.1 million individuals. The INS operation won at least tacit support from several key groups; the Mexican government, labor groups, and even Mexican-American civil rights groups acknowledged the labor problem, but they withheld extensive criticism. While the raids disrupted the growing seasons in California and Arizona, the government pacified farm owners with promises of additional bracero labor.  Though the program was touted as a success, its effects were short-lived; illegal entry exploded again after the United States terminated the Bracero Program in 1964.