This California Supreme Court case ruled that the testimony of a Chinese man who witnessed a murder by a white man was inadmissible, denying Chinese alongside Native and African Americans the status to testify in courts against whites.

How did the Supreme Court of California justify barring the testimony of Chinese people in court?

In what ways did the Court deem Chinese, Native, and African American as different from white people?

What impact do you think being excluded from testifying in court had on Chinese communities in California?

This California Supreme Court ruled that the testimony of a Chinese man who witnessed a murder by a white man was inadmissible, largely based upon the opinion that the Chinese were “a race of people whom nature has marked as inferior, and who are incapable of progress or intellectual development beyond a certain point” and as such had no right “to swear away the life of a citizen” or participate “with us in administering the affairs of our Government.”  This decision categorized Chinese alongside Native and African Americans as lacking status to testify against European Americans in court. 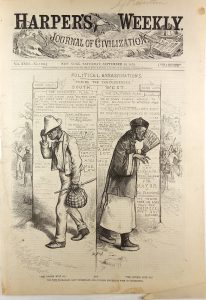 Thomas Nast Cartoon: “The nigger must go,” and “The Chinese must go.” The poor barbarians can’t understand our civilized Republican form of government”

**1 *399 Section 394 of the Civil Practice Act provides, “No Indian or Negro shall be allowed to testify as a witness in any action in which a White person is a party.”

Section 14 of the Criminal Act provides, “No Black, or Mulatto person, or Indian shall be allowed to give evidence in favor of, or against a White man.”

Held, that the words, Indian, Negro, Black and White, are generic terms, designating race. That, therefore, Chinese and all other people not white, are included in the prohibition from being witnesses against Whites . . .

The appellant, a free white citizen of this State, was convicted of murder upon the testimony of Chinese witnesses . . .

[Chinese are] a race of people whom nature has marked as inferior, and who are incapable of progress or intellectual development beyond a certain point, as their history has shown; differing in language, opinions, color, and physical conformation; between whom and ourselves nature has placed an impassable difference . . .

For these reasons, we are of opinion that the testimony was inadmissible.