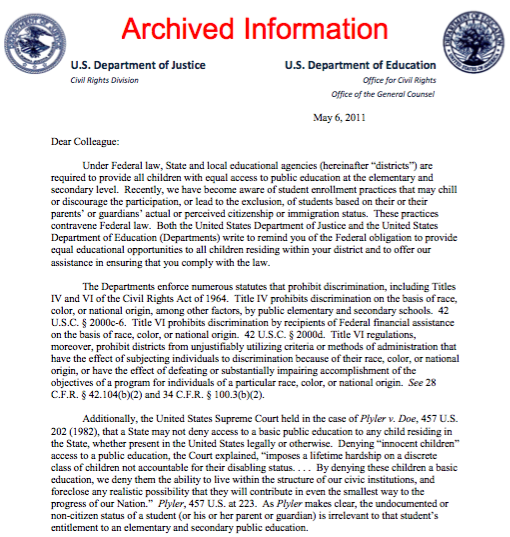 What kind of state laws did this Supreme Court decision overturn?

Where in the text of the decision does the justice justify the court’s position?

What are some potential harmful effects caused by restricting immigrants from social services, like education?

JUSTICE BRENNAN delivered the opinion of the Court.

The question presented by these cases is whether, consistent with the Equal Protection Clause of the Fourteenth Amendment, Texas may deny to undocumented school-age children the free public education that it provides to children who are citizens of the United States or legally admitted aliens…

… education has a fundamental role in maintaining the fabric of our society. We cannot ignore the significant social costs borne by our Nation when select groups are denied the means to absorb the values and skills upon which our social order rests.
In addition to the pivotal role of education in sustaining our political and cultural heritage, denial of education to some isolated group of children poses an affront to one of the goals of the Equal Protection Clause…

“education prepares individuals to be self-reliant and self-sufficient participants in society.”

… we think it clear that “[c]harging tuition to undocumented children constitutes a ludicrously ineffectual attempt to stem the tide of illegal immigration,”

…the record in no way supports the claim that exclusion of undocumented children is likely to improve the overall quality of education in the State… the record is clear that many of the undocumented children disabled by this classification will remain in this country indefinitely, and that some will become lawful residents or citizens of the United States…

If the State is to deny a discrete group of innocent children the free public education that it offers to other children residing within its borders, that denial must be justified by a showing that it furthers some substantial state interest. No such showing was made here. Accordingly, the judgment of the Court of Appeals in each of these cases is