The U.S. Department of Justice conducted a series of raids to round up, arrest, and deport suspected anarchists and left-wing radicals.

Goldman was an immigrant and an anarchist, rendering her vulnerable to deportation under U.S. immigration laws. 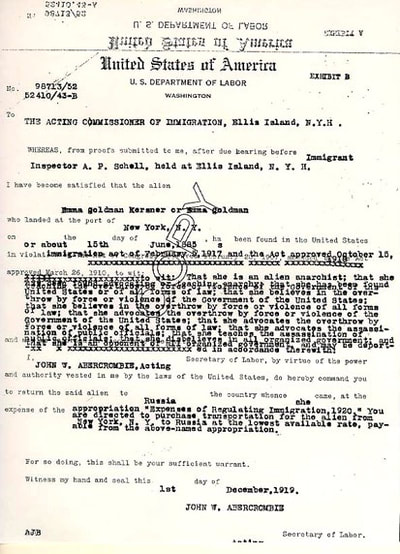 What happened in the Palmer raids?

Why were immigrants targeted during the “red scare”?

How did the Palmer raids violate civil liberties?

Attorney General A. Mitchell Palmer spearheaded efforts to round up anarchists, communists, and other political radicals and then deport them when possible. World War I and the 1917 Russian Revolution inflamed American fears of the spread of radicalism and immigration from Europe, contributing to the first “red scare” in the United States. As state and local governments purged radicals from public service and cracked down on left-wing labor organizing, Palmer undertook the most visible campaign against radical organizations, often immigrants from Southern and Eastern Europe. Between November 1919 and January 2020, Palmer’s agents deported nearly 250 people, including notable anarchist Emma Goldman, and arrested nearly 10,000 people in seventy cities.