In the settlement of the Mexican-American War, this treaty formalized the United States' annexation of a major portion of northern Mexico, El Norte, and conferred citizenship on Mexicans choosing to remain in the territory.

What process did the treaty of Guadalupe Hidalgo establish for the Mexican nationals living in the newly acquired U.S. territories?

Why do you think the treaty drafters anticipated possible difficulties in setting the boundary lines of California and New Mexico? You may want to refer to the map on to this page.

What kind of political conflicts do you think arose from the inclusion of new territories and non-white communities into the United States?

In settlement of the Mexican-American War, this treaty formalized the United States’ annexation of a major portion of northern Mexico, including of California,  Nevada, Utah, Colorado, and most of present-day New Mexico and Arizona. The treaty set the Rio Grande river as the border between Texas and Mexico and extended the United States’ territorial reach to the Pacific coast. Mexican residents could become U.S. citizens if they chose to remain within the newly U.S. territory although their legal citizenship did not confer all the acceptance and integration of social citizenship.  This territorial acquisition raised political issues in the United States regarding the westward extension of slavery and the inclusion of non-Europeans as U.S. citizens as by Asian immigrants arrived in growing numbers to the west coast. 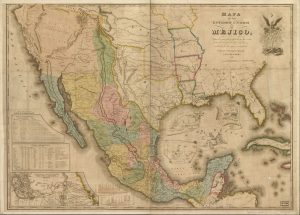 Article V
The boundary line between the two Republics shall commence in the Gulf of Mexico, three leagues from land, opposite the mouth of the Rio Grande, otherwise called Rio Bravo del Norte . . . along the whole southern boundary of New Mexico (which runs north of the town called Paso) to its western termination; thence, northward, along the western line of New Mexico . . . thence across the Rio Colorado, following the division line between Upper and Lower California, to the Pacific Ocean.

The southern and western limits of New Mexico, mentioned in the article, are those laid down in the map entitled “Map of the United Mexican States, as organized and defined by various acts of the Congress of said republic, and constructed according to the best authorities. Revised edition. Published at New York, in 1847, by J. Disturnell,” of which map a copy is added to this treaty . . . And, in order to preclude all difficulty in tracing upon the ground the limit separating Upper from Lower California, it is agreed that the said limit shall consist of a straight line drawn from the middle of the Rio Gila, where it unites with the Colorado, to a point on the coast of the Pacific Ocean, distant one marine league due south of the southernmost point of the port of San Diego . . .

Mexicans now established in territories previously belonging to Mexico, and which remain for the future within the limits of the United States, as defined by the present treaty, shall be free to continue where they now reside, or to remove at any time to the Mexican Republic, retaining the property which they possess in the said territories, or disposing thereof, and removing the proceeds wherever they please, without their being subjected, on this account, to any contribution, tax, or charge whatever.

Those who shall prefer to remain in the said territories may either retain the title and rights of Mexican citizens, or acquire those of citizens of the United States. But they shall be under the obligation to make their election within one year from the date of the exchange of ratifications of this treaty; and those who shall remain in the said territories after the expiration of that year, without having declared their intention to retain the character of Mexicans, shall be considered to have elected to become citizens of the United States.

In the said territories, property of every kind, now belonging to Mexicans not established there, shall be inviolably respected. The present owners, the heirs of these, and all Mexicans who may hereafter acquire said property by contract, shall enjoy with respect to it guarantees equally ample as if the same belonged to citizens of the United States.

​The Mexicans who, in the territories aforesaid, shall not preserve the character of citizens of the Mexican Republic, conformably with what is stipulated in the preceding article, shall be incorporated into the Union of the United States. and be admitted at the proper time (to be judged of by the Congress of the United States) to the enjoyment of all the rights of citizens of the United States, according to the principles of the Constitution; and in the mean time, shall be maintained and protected in the free enjoyment of their liberty and property, and secured in the free exercise of their religion without restriction.